But at this past Tuesday's London Assembly "Regeneration" meeting with QPR's Chief Operating Officer, Mark Donnelly and others,  Donnelly spoke about the new Stadium and area plans.  He then unequivocally stated the QPR Training Ground at Warren Farm in Ealing was going ahead.

- Donnelly's comments start at around the 40 minute mark of the London Assembly Video of the Meeting-  www.london.gov.uk/webcasts/38356/asx

I'll leave to others to "Square the Circle" with previous comments about the QPR Training Facilities.

Posted by Administrator at 2:31 PM

But this past Tuesday a tweet from the London Assembly Member, Murad Quershi who serve on the Regen Committee declared: @muradqureshiam: At Regeneration Committee @londonassembly where @qpr 's Mark Donnelly confirms club is still committed to Warren Farm facilities in Ealing”

In response to a query:  QPR REPORT @QPRReport
@MuradQureshiAM @LondonAssembly Can You Clarify? Because #QPR Fans have been led to believe @QPRFC was no longer "committed to #WarrenFarm"

As for this past Tuesday's London Assembly meeting with QPR's Chief Operating Officer, Mark Donnelly

The London Assembly’s Regeneration Committee will meet tomorrow to examine the stadium-led regeneration schemes underway at the Olympic Park and proposed at Old Oak Common.

The Committee will hear from West Ham United FC and QPR FC on how they plan to engage with their local communities and deliver successful regeneration schemes.
The Committee will question the following guests;
The Committee is also inviting Londoners living or working near a football stadium to have their say on how rebuilding or refurbishing facilities has affected them or benefited their community. The survey is currently live.

The meeting will take place on Tuesday, 16 September from 10.00am in Committee Room 5 (The Queen’s Walk, London SE1).

Media and members of the public are invited to attend. The meeting can also be viewed via webcast.
Ends
Notes to editors:
1.    The stadium-led regeneration survey: http://talklondon.london.gov.uk/content/impact-new-stadium
2.    Gareth Bacon AM, Chairman of the Regeneration Committee, is available for interview. See contact details below.
3.    As well as investigating issues that matter to Londoners, the London Assembly acts as a check and a balance on the Mayor.

Archived webcasts are normally made available within a couple of hours of the end of the meeting.

www.london.gov.uk/webcasts/38356/asx
Posted by Administrator at 9:41 AM 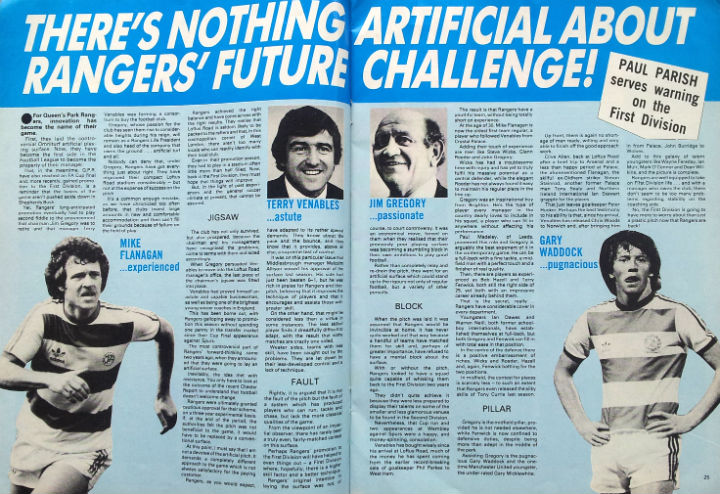 Reading Terry Venables' new autobiography, "Born to Manage" (a prize from Queen's Park Rangers FC), I was fascinated - and shocked - to read that Terry Venables, when manager of QPR back in the early 1980s, had suggested changing the name of QPR to London FC. But QPR Chairman Jim Gregory had demurred.

Venables writes "I even suggested changing the club's name, but I have to admit that Jim Gregory was uneasy about the idea.  His love affair with QPR was genuine. When I put it to him that London FC would be a name for the future, he could see what I was trying to achieve but never sounded convinced."

"I find it astonishing that London is the capital city, yest there is not one club with London as part of its name.....Rangers is not even in Queens Park. That was why I wanted to see us adopt a new name . London FC would have been simple, straightforward and instantly recognisable but it didn't happen as it went against the grain for traditionalists such as Jim."


Ironically just a few years ago (September, 2008), Charles Sale in the Daily Mail reported that "The super-rich owners of London Championship team QPR have been discussing changing the name of the club to Queens Park City in order to emphasis its location in the capital. Renault boss Flavio Briatore...has been openly debating the idea with friends in football and motor racing." Daily Mail

In response to that Sale article, QPR Chairman Flavio Briatore issued an official Statement
"This is pure fabrication and I don't know where the story has come from. I haven't spoken to anybody about this subject. "I don't know the journalist, but I know the story is totally untrue and we will be contacting our lawyers to pursue this matter further. "I can categorically deny that there is any truth in this article...."
Posted by Administrator at 9:43 AM